The first of the videos was filmed in the Stone Summit facilities in Atlanta, GA and on it we can see “Cinnabar” climbing an artificial wall.

The second was filmed during Camp feral in Algonquin, Ontario in Canada.

And finnaly the last one we see “Oki Doki” in Robbers Cave state Park during Wild Nights 2010 showing his rappeling skills.

Additionally, browsing in Youtube we found a couple more with some trekkings and more stuff, so it seems our fursuiting friends are starting a trend on mountain sports!

You can read the original spanish article right here.

And if you are wondering with all that says, here’s an english translation of the text:

Have you ever been climbing and noticed all those mice, lizards and other animals while you climb? so why to doubt it? Animals climb and now they also do it in artificial walls.

Years ago, in one of the Banff Mountain Film Festival we saw a dog that was really climbing using paws, head and all its body to go beyond where most dogs stopped. In that moment everyone liked the film.

Maybe it was that dog, we really don’t know, but the thing is that there are many animals climbing walls. Well, what we could think it’s an animal at first sight is really a person with animal mascot costumes climbing or doing another mountaineering activity.

Let’s correct that last statement, it’s not strictly a “mascot costume”, they are called “fursuits”, in other words: an animal-shaped costume which is a representation of the people inside. Because who wears the suit is not just some random person but a member of a community that seems to have grown beyond of what they thought themselves.

The generic term for them is furry (plural: furries) and it’s an English word. It’s meaning is “with fur”, that simple.

Like everywhere else where mascots show up, where furries show up there seems to be a great commotion from children. And well, these characters begun to appear in the mountaineering scene, mainly in artificial walls where it seems they are well accepted, mainly by climber kids and teens.

These characters share their joy and fun once they are inside the suit. It’s the benefit of annonimacy. However it should be good if someone could get in touch with them and tell them a bit about security regulations. In the third video, the wall is locked on a flexible steel cable and in the last; the furry is jumping on the rope while the rope is rubbing against a sharp edge. Both are to be avoided as they may represent a security risk.

However, it seems that this will be a new way to bring people to climbing sports in mass. Just a comment, you should keep an eye on your pets, especially if you see them near to your climbing harness”.
With content from montanismo.org
translated with permission from the author. 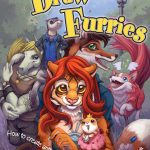 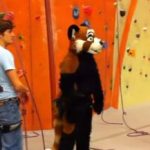 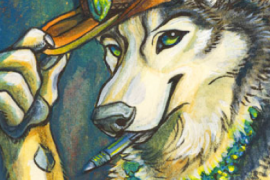 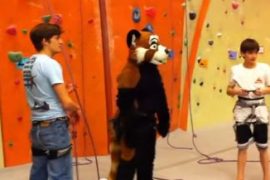