After the release of our last review of “Sixes Wild: Manifest Destiny” by Tempe O’Kun, we had a nice conversation with him about his recent work, where he gave us some exciting news about his upcoming work, new info on the Nordguard Game, and more.

Hello Tempo! And thank you once again for agreeing to this interview! we know you are someone who likes to keep himself busy, so we are glad you are making some time for us.

Hi Arakum. It’s great to talk to you.

First of all we’d like to know a bit more about yourself, we found a bit about you on Wikifur, we learned you are 28 and you were born in Grand Forks, how was it growing up being a furry in North Dakota?

North Dakota is quiet and polite, traits which have seeped down from Canada over the years, as well as sparsely populated. While it might seem to furries in ND that they are alone, this is simply because North Dakotans generally don’t want to be seen as making a fuss, so telling everyone that you think of yourself as a talking animal person is uncommon. Once you get involved in the furry community, though, you find that there are plenty of furries in ND.

Was it hard for you to explain to friends and family about the furry fandom?

A: It was easier than I thought it would be. I found the best way to explain it to them was to start by telling them I write fantasy stories. Anything can be fantasy, really. From there, I got more specific by telling them about why I like using animal species as metaphors or to convey a lot of ideas about a character in a short time. Much like Tolkien fantasy used elves or dwarves to set up your expectations for a character, making someone a badger makes you expect something different from them than if I made them a shrew. Furthermore, it helps to remember everyone is a furry to some degree, thanks to Disney movies. I found that the less weird I acted like furry was the more easily people accepted it.

And now let’s talk about your book “Sixes Wild: Manifest Destiny” which we heard is selling well. Why did you decide to write a furry book about the old west?

Because it didn’t exist! I had never seen a furry western, so it seemed like an interesting new direction to explore. One of the biggest appeals of writing for me is that I can strive to create original and interesting situations, characters, and worlds, which is both rewarding and challenging. What’s more, I was taught by my writing professors that genres are lenses with with we view stories. Sometimes seeing through more than one lens at a time allows us to see elements we otherwise wouldn’t. What’s more, I wanted to write a western about furries because I knew it would stun the western readers of the world.

Is there anyone you know that inspired the personality of?? “Six Shooter”?

Many people, actually. Six’s dialog, for example, was half various friends from the Southern US and half my grandmother when she’s being dramatic. Overall, though, I wanted to take the character of “the Old West gunfighter”, flip the gender, and see what happens. Western literature doesn’t show many people who defy traditional gender roles and I’ve always had a fondness for sassy, independant women.

We have found some animated demos of what seems to be an animation of Six Shooter, are there any plans of an animated short?

Keiron White (TheFunkyOne on FA), a professional animator in the UK, liked the novel and contacted me a while ago. He was interested in doing an animation of it, so we threw some ideas back and forth and suddenly we were working on a short. I can confirm that the short is complete and he’s going to release it when the Sixes Wild e-book comes out to celebrate. I just spent a month making the e-book (and exclusive bonus content) and Sofawolf Press is planning to release it on Kindle, Nook, and iPad.

Now, there is a question that I must ask (as you can imagine some people have asked me) the title references the old concept about the expansion of the USA throughout America which has made us a bit curious about why you choose that title for your book?

A: Ah! I’ve been waiting for someone to ask that. Basically, there are two manifestations of destiny happening: 1) the expansion of the eastern US into other lands, bringing with it both good and bad (the lawbat Blake and the businesslion Hayes represent these, one traveling there to ensure the various settlers and natives obey the law (also a somewhat naive hope for adventure), the other traveling there purely to exploit them) and 2) the fulfillment of what Six’s father failed to achieve. Furthermore, the magical “echoes” that exist in this world manifest the dead to its inhabitants in very real ways, especially for Six. Additionally, as you probably noticed in the book, US expansionism is not presented in a glorified way, which came as a shock to some of the older western fans reading this book.

What else can we expect from Six Shooter in the future?

A: I’ve been writing a number of short stories for a Sixes Wild anthology, which would include the stories from FA as well as about half a dozen new stories, each with an illustration. In addition, I’ve finished the outline for Sixes Wild 2, though both of these projects are going to have to wait other books are complete and published.

Is there any project other than Sixes Wild that you are working on?

I sent in the second-to-last draft of my Code Drop novel about a month ago. It’s a romance novel for nerds, since that also didn’t exist! I’m also 10,000 words into a my third novel, which is currently called Adaptation. It’s a modern-day cosmic horror / romance novel I’m writing with Slate.

We know that you are part of the Furry Writer’s Guild, what is the Guild?

They are a group organized to advance the quality of literature in the furry fandom as well as its perception outside the fandom. They share useful writing articles, host events at conventions, and honor books with their C??yotl Award. Sixes Wild winning the award for Best Adult Novel of 2012 has really helped elevate it in the eyes of institutions outside the fandom. For example, I’ve been a guest speaker several times at Bismarck State College (my alma mater) and the college has a giant version of the cover art hanging in their office on permanent display (it’s even signed by Shinigamigirl, the artist).

Previously today you told us about how you broadcast live feeds while you write stories, how do you think that interaction with your audience helps your work?

A: I was inspired to stream my writing after seeing artists in the fandom streaming their drawing. I use Google Docs for collaborating with editors and it has a chat feature, so I figured it would be useful for letting folks watch me write. I announce on Twitter (Tempo321), FA (Tempo321), and Sofurry (Tempo) when I’m streaming. The main reasons it helps are that it make me keep writing because I don’t want the watchers to get bored and lets me interact with fans as I write–they can tell me if they see a typo and I can ask them if a sentence or metaphor makes sense. Also, it’s just really encouraging to know that people are interested enough in my work to want to come and chat with me and watch it happen.

As some of our readers may know, you also helped Black Teagan and Kenket on their board game ‘Nordguard’. Do you design board games for a living? Or how did that project came to be?

A: Sofawolf Press was at CONvergence, a con that has more to do with games than furry comics and books. Brer, the CEO, was chatting online with me about how we’d be attracting more attention if we had a card game. I told him I’d be right back. Three hours later, I was over at a friend’s house taking cell phone pictures of a version of the game I’d made our of pieces of a Coke box. I had never designed a card or board game before, but I’d played plenty of them. I wanted to make something very different from what currently existed, especially Furoticon, so I made it a cooperative boxed set rather than a competitive CCG. It’s basically a boardless board game. After that, I showed the prototype to Blotch and we decided it would be an interesting way for people to learn more about the Nordguard universe. We’ve tried to squeeze as much ‘flavor’ into the game as possible, since it allows fans to see sides of that universe that aren’t covered in the graphic novels.

While we were at Further Confusion earlier this year, we got our paws on a promo card for the Nordguard game with Six Shooter on it and it got us thinking about the name of the town, is there any relation between Sixes Wild and Nordguard?

The two series are about 7 years apart and both take place in a frontier. The main characters are both tough daughters of Old West lawmen who have numbers for names and wield custom Colt Peacemakers (I swear we didn’t plan this!) Blotch and I have joked that they are the same universe. We left it unclear because the tone of the two series are very different, but we thought the idea of crossover promotional cards would be fun.

We really thank you for taking all this time to answer our questions, we now have one final question for you, what is this about you owning a kilt?

I’m happy to be interviewed! While I took a few years of Spanish in high school, it has sadly fallen to the fate of so many languages learned but not used daily, so it’s great to be able to reach out to Spanish-speaking furs via Red Furros. Also, I not only have a kilt, but a kilt in the official tartan of my family, the Murrys of Scotland. With how often ‘murr’ is a response to my works, I’m sure my ancestors would be proud.

Also, for those who purchased the the “Nordguard”Card Game, additional to the promo cards that you may have found on the furry conventions with Six Shooter as a new character, Tempo also told us that there are new cards been released this year, including one of “Blake” the Sheriff from “Sixes Wild”:?? 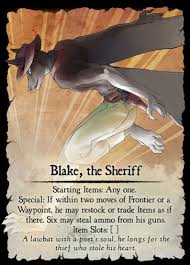 Sixes Wild: Manifest Destiny is a Western romance novel about a Gunslinger hare that falls in love with the local sheriff and is involved in many adventures with gangs, a lion with a secret, and many strange events happening everywhere.??

So, we have good news for our readers outside of the US, the Kindle version of Sixes Wild: Manifest Destiny for Kindle??is??now available, Go get it!

EDIT :??Tempo gives us a sneak peek of one of the illustrations by Slate (Who just finished drawing!) that will be published on his upcoming novel “Adaptation”, a terror/romance novel. On this illustration beautifuly made , we can see the characters Kylie (on the right) and Max (left). 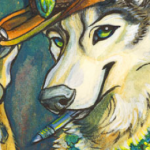 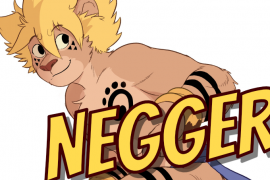 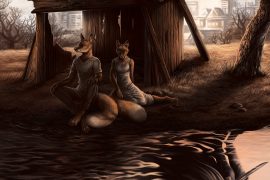